In 2017 I entered Writing the Future, the world’s largest health writing prize. The remit was to imagine how health and healthcare might look in the UK in 2100, and to write a good story about it. Run by Kaleidoscope Health & Care, and supported by Imperial College London, The Commonwealth Fund, and The House of St Barnabas, the goal was to inspire scientists to push the envelope using science fiction ideas. I didn’t win, but I was incredibly proud to have been longlisted. Kaleidoscope published all of the longlisted stories on their website, where you can read all of the entries. My story, The Engine Master and the Genescapes, is about the placebo effect, and you can download the fancy PDF Kaleidoscope produced here:

The Engine Master and the Genescapes

In 2015 I had a story published on the great website, Daily Science Fiction. It was a piece of flash fiction called Dinosaur Man. Click HERE to read it. One reviewer called it, “internally consistent.”

In 2013 Plastik asked me to write a piece of flash fiction for their site. You can read Some Jellyfishes Live Forever HERE.

In 2015 my short story Колыма (pronounced Kolyma) was included in an anthology of Welsh writing called Secondary Character, edited by Barrie Llewelyn. 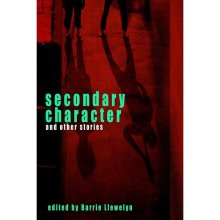